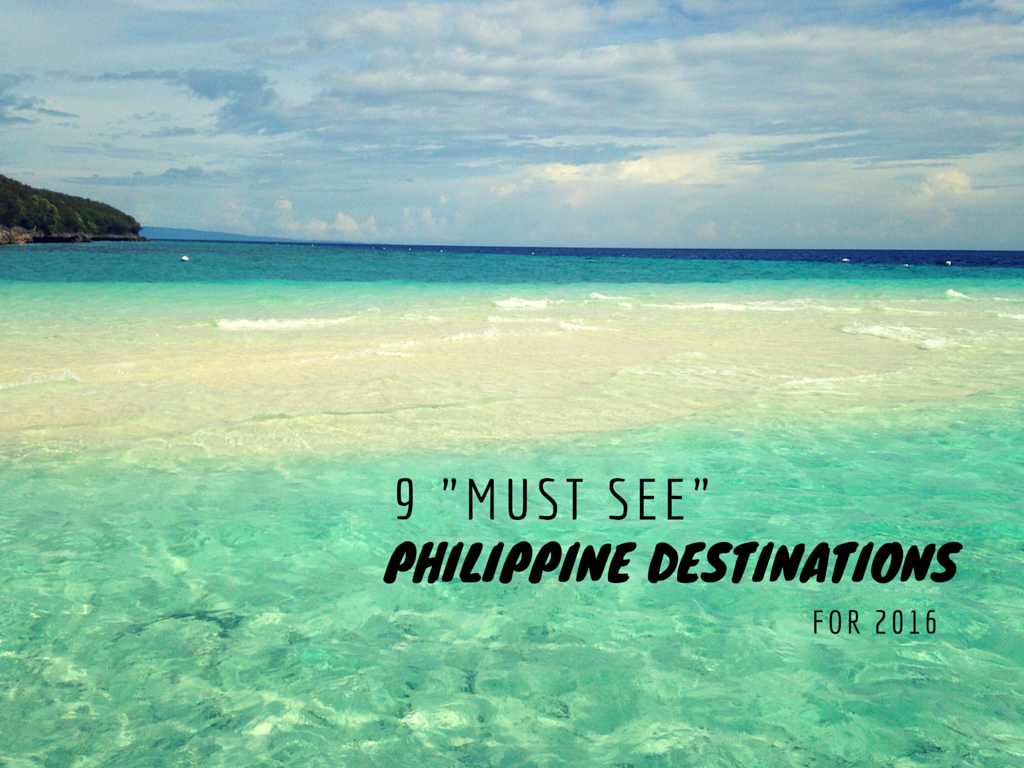 We have 11 more months to make our travel getaways come true. If you’re a full time worker, then most probably you want sometime to escape the crowded, traffic and stressful city living. (and you deserve it!)
We have 9 amazing holiday breaks this year so let’s make use of it to our own advantage. Today, I want to share with you the 9 places left on my list. Experience nature’s best from the best Philippine destinations!

The Calaguas is located in the Philippine province of Camarines Norte. It includes the major islands of Tinaga Island and Guintinua Island, the minor Maculabo Island, as well as several other minor islands.

El Nido is a first class municipality and managed resource protected area in the province of Palawan in the Philippines. It is about 420 kilometres south-west of Manila, and about 238 kilometres north-east of Puerto Princesa, Palawan’s capital.

Siargao is a tear-drop shaped island in the Philippine Sea situated 800 kilometers southeast of Manila in the province of Surigao del Norte. The coastline is marked by a succession of reefs, small points and white, sandy beaches. The neighboring islands and islets have similar land forms.

Pagudpud is a fourth class municipality and a coastal resort town of Ilocos Norte province, in the northern Ilocos Region of the Philippines. It is the northernmost settlement on Luzon Island and a popular tourist destination because of its resorts and beaches.

Oslob is a fourth income class municipality in the province of Cebu, Philippines.

Coron is a first class municipality in the province of Palawan, Philippines, comprising the eastern half of Busuanga Island, all of Coron Island and about 50 other minor islets stretching as far as Tara Island in the north-east and Canipo Island in the south.

Batanes is an archipelago province in the Philippines situated in the Cagayan Valley region.

The island group is located approximately 162 kilometres (101 mi) north of the Luzon mainland and about 190 kilometres (120 mi) south of Taiwan, separated from the Babuyan Islands of Cagayan Province by the Balintang Channel, and from Taiwan by the Bashi Channel.

Vigan is a fourth class city and capital of the province of Ilocos Sur in the Philippines.

It is a UNESCO World Heritage Site in that it is one of the few Hispanic towns left in the Philippines where its structures remained intact, and is well known for its cobblestone streets and a unique architecture that fuses Philippine and Oriental building designs and construction, with colonial European architecture. In

Siquijor is a fifth income class island province of the Philippines located in the Central Visayas region.

During the Spanish colonial period of the Philippines, the Spaniards called the island Island of Fire (Spanish: Isla del Fuego). Siquijor is commonly associated with mystic traditions that the island’s growing tourism industry capitalizes on


I’ve already been to Bohol, Cebu and Legazpi last year and just last week I was in Baguio. I will definitely post all the info about tours and the adventures very soon!

How about you? Have you been to these places? I’d love to know!

[Disclaimer] The general information about the places mentioned above was originally taken from Wikipedia.